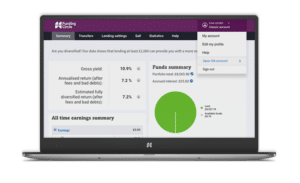 Funding Circle, the UK’s biggest peer-to-peer lending platform, is preparing to hire advisers to oversee a £1bn-plus London flotation. A flotation of Funding Circle, one of Britain’s most prominent financial technology companies, has been anticipated for some time, and will stir enormous anticipation among City bankers.

Funding Circle, which launched in 2010, has matched lenders to tens of thousands of small business borrowers, facilitating loans totaling more than $5bn globally during its seven-year existence.

When Funding Circle was founded, we could see that businesses weren’t being given the finance to grow, while investors were making poor returns. We had a simple idea — let them support each other.

By lending directly to businesses through Funding Circle, investors can now earn attractive returns to better provide for their future. Businesses get fast, easy access to funding to grow, create jobs, support local communities and drive the economy forward. We believe it’s better for everyone.

Funding Circle is one of the best-capitalised lending platforms in the world and listed on the London Stock Exchange (Ticker: FCH) in October 2018. They have raised approximately £550 million since 2010 from some of the largest and most sophisticated investors around.

Its rapid growth has earned it the status of one of the UK’s few fintech “unicorns” – companies which have achieved a prized $1bn price-tag. Sources said this weekend that it was likely to comfortably exceed the $1bn ‎valuation it hit when it raised £82m of new funding in January from investors led by Accel, the blue-chip tech company backer.

A syndicate of investment banks is expected to be hired by the spring to steer the flotation, they added, with some existing investors believing the company could be worth as much as £2bn. Funding Circle’s other big shareholders include funds such as Baillie Gifford, the Edinburgh-based manager, DST Global, Index Ventures and Rocket Internet.

They identified opportunities offered by new technology to provide access to finance for businesses frozen out by mainstream banks, while also promising superior returns to investors. The P2P sector, as it has become known, has seen an explosion in the number of providers and the range of products, with the likes of Funding Circle launching so-called Innovative Finance ISAs. The company has also struck partnerships with Royal Bank of Scotland and Santander UK.

Peer-to-peer lending has come under growing scrutiny as the asset class has expanded, with rivals including Rate setter. However, some ‎prominent City figures, including Lord Turner, the former FCA chairman, have raised concerns about the industry’s lending standards.

He subsequently moderated his warning, ‎acknowledging that peer-to-peer lending was “likely to become a stable, significant and useful part of our total credit supply system”. If an initial public offering is successfully completed, it will value the stakes of the three Funding Circle founders in the tens, and probably hundreds, of millions of pounds.

It is unclear whether he plans to remain at the helm beyond the point of an IPO. The company’s growth trajectory suggests it is likely to benefit from strong investor interest. It has lent more than £1.7bn this year, with the US and Continental Europe showing rapid expansion.

Funding Circle was quickly became the first choice for finance for small businesses globally and claimed that the company’s lending activity had helped to create 100,000 new jobs. Funding Circle already has a presence on the stock market, having listed an SME income fund on the London Stock Exchange in 2015.

A successful float of the wider group, which would emulate that of rival Lending Club in the US‎ in 2014, would spark a race among UK competitors to go public.

If it takes place in 2018, Funding Circle’s listing will undoubtedly be among the most prominent in the London market over the coming year.

This week, the LSE hailed its strongest performance in raising money from IPOs for three years, with investors ploughing £15bn of new capital into 106 companies making their stock market debuts in 2017.

The precise sum that Funding Circle will seek to raise by selling new shares in its flotation is unclear and will not be determined until much closer to the launch.

In April 2020 Funding circle was accredited to offer the Coronavirus Business Interruption Loan Scheme (or CBILS). This is a government initiative for small businesses across the UK who have been affected by coronavirus. Through this scheme, UK SMEs will be able to access finance to help with cash flow during this period.

The scheme provides lenders with a government-backed guarantee. This guarantee potentially enables lenders to lend to businesses that might not have previously been eligible for a loan, due to the effect coronavirus has had on their business.

CBILS will also cover the first 12 months of interest payments and fees. This means that smaller businesses can benefit without upfront costs and lower initial repayments.