Advantages and disadvantages of overdrafts 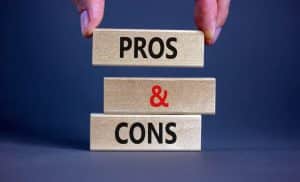 An overdraft is when you spend more money than you have in your account. Your bank will usually allow you to do this, up to a certain limit, and will charge you a fee for doing so. Overdrafts can be useful in an emergency, or if you need to make a large payment but don’t have the funds immediately available.

However, there are also some drawbacks to using an overdraft. The fees can add up quickly, and if you regularly exceed your limit, it can damage your credit rating. Additionally, some banks may cancel your overdraft facility if you miss a payment on another product, such as a loan or credit card.

For these reasons, it’s important to consider both the advantages and disadvantages of using an overdraft before deciding whether it’s the right financial solution for you

Advantages of an overdraft

An overdraft is an arrangement with a bank that allows customers to withdraw more money than they have in their account. There are a number of advantages and benefits to having an overdraft, including the ability to cover unexpected expenses and the peace of mind that comes with knowing you have a safety net in place.

Overdrafts also tend to be much less expensive than other forms of borrowing, such as credit cards or payday loans. However, it is important to remember that overdrafts are a form of debt, and as such, they should be used sparingly and repaid as soon as possible. Used responsibly, an overdraft can be a valuable tool, but it is important to understand the risks before entering into one.

Disadvantages of an overdraft

An overdraft can be a useful tool in managing your finances, but there are also some potential disadvantages to consider. One of the main risks is that you may end up paying fees and interest charges if you go over your agreed limit. This can quickly add up, and if you’re not careful you could end up in debt.

Additionally, an overdraft may affect your credit rating, which could make it harder to borrow money in the future. Another thing to bear in mind is that your bank could reduce or cancel your overdraft facility at any time, which could leave you in a difficult financial situation. So while an overdraft can offer some flexibility, it’s important to be aware of the potential risks before you agree to one.

Overdrafts and loans are both ways to access extra funds when you need them, but there are some key differences between the two. An overdraft is a facility that is linked to your business bank account, and it allows you to spend up to a certain limit even if you don’t have the funds in your account.

This can be helpful if you have an unexpected expense, but it’s important to remember that you will need to repay the overdraft plus any fees as soon as possible. A loan, on the other hand, is a sum of money that you borrow from a lender and then repay over an agreed period of time. Loans can be secured or unsecured, and they usually come with fixed interest rates.

This means that you will know exactly how much you need to repay each month, making it easier to budget for your repayments. So, if you’re considering borrowing extra funds, it’s important to weigh up the pros and cons of an overdraft or a loan to make sure you choose the option that best suits your needs.