Negative interest rates – how will they affect your savings? 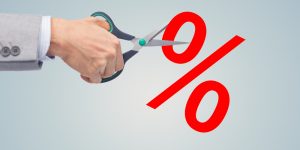 While it is true that countries all around the world are having to go to extreme lengths in order to keep their economies afloat, it hasn’t yet had a knock-on effect to things such as customer saving accounts.

Though, the Bank of England has now made it clear that it may well take the cost of borrowing below zero. On a basic level, if negative interest rates become a reality, you may start having to actually pay a fee for your savings to be stored by the company which you bank with.

Why would anyone choose to pay a bank to stash their money for them, especially when they can keep it at home for free? Logically, they wouldn’t and nobody would be able to blame them for making that decision. No one in their right mind is going to actively choose to pay a high street bank any kind of fees for simply storing their money on their behalf. This is why we will more than likely begin to witness many full withdrawals and even account closures in order to prevent such fees having to be paid, which could obviously prove troublesome for banks around the country.

What is a negative interest rate?

When someone says the term ‘interest rates’, they’re referring to the Bank of England base rate, as these two things are usually interchangeable. This base rate determines how much interest the Bank of England pays to financial institutions that hold money with it, and what it charges them to borrow. High street banks will often use it to regulate how much interest they pay savers and to work out exactly what they’ll charge people taking out a mortgage or loan of any kind.

The Bank of England will normally lower interest rates when they want people to spend more and in turn, save less at any given period of time.

The BBC report, “It cut them to a fresh low of 0.1% in March to try to stimulate the economy amid the coronavirus pandemic. In theory, taking interest rates below zero should have the same effect. But in practice, it’s a bit more complicated. After all, why would anyone pay to stash money in a savings account or lend someone money, when they can keep the cash at home for free?” 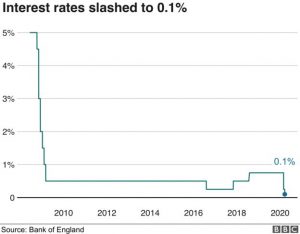 Just as a positive interest rate can help to slowly increase your savings over time, a negative one will see them decrease in the same way. Even though this may be just as slowly as your money could make money in a bank (where you often hardly notice it at all these days), it still isn’t ideal for anyone to be losing a percentage of their hard-earned savings.

A negative interest rate would normally result in the customer being charged by a bank for the keeping of their funds. Though, as already pointed out in this article, this would result in practically all customers withdrawing their funds or moving them elsewhere before any serious damage is done to their savings.

If your savings are in a bank account that has become plagued with financial issues, you should act quickly to get your money out of their as fast as possible. The longer it remains in a negative interest rate environment, the more it will suffer. Why wait around and let your cash deplete over time; either make a full withdrawal from your local high street bank, or move it into a different account. This transferal process can now often be fully completed online, making it quite a hassle-free and convenient process for customers.

How will this affect British savers?

If you have been the owner of a savings account in recent years in the UK, the chances are you’ve already been witnessing your returns dwindling. Though, naturally it has never gotten to a point in which customers are having to pay additional fees, just to ensure their money is being securely kept by a high street banking company.

Negative rates will surely have massive consequences for banks all throughout the country. Custom will surely drop once additional fees begin to be charged and the number of regular savings accounts, as well as any form of cash Isa, etc. will likely also deplete by quite some level.

A base rate that drops below zero will stir up more hassle for banks within the UK, as it will result in them having to pay in order to deposit cash with the central bank. This will all most probably result in Britons taking their funds out of banks and building societies, and therefore potentially having catastrophic effects on the UK banking world.

Will your money be on the move?

For those of us that discover the unfortunate news that banks will begin to charge us for merely keeping our money, it’ll seem an easy decision to make and we’ll move our money elsewhere; somewhere that isn’t going to charge us.

As a customer, you’ll likely want to weigh up the different options at your disposal if you’re to take the move away from traditional banking in order to dodge these unfair charges. You’ll know about the different types of savings accounts offered to you in today’s banking market, but are you aware of the other places you can store your money? There’s more you can do than simply withdrawing the lot and keeping it in a safe at home.

Here’s a handy list containing a few options for where your money can be stored instead of a traditional bank account:

Premium bonds – Starting at a minimum deposit of £100, by choosing to store your money in Premium Bonds, you’ll be in with a chance at winning the jackpot. While you don’t actually earn any interest by placing your money into a premium bonds account, you will be entered into a monthly prize draw in which you could win up to £1 million, plus you don’t have to pay any taxes on what you win. Your money will also be secured by HM Treasury, so while you may not win any money, you won’t run the risk of losing any either.

Stash it in your house – There will certainly be no risk of being charged for storing your money in the comfort of your own home. Using a safe, or something in a similar vein to that, you’ll be able to keep your hard-earned cash locked away inside your very own vault. Though, this does pose obvious problems, for example, if your house is ever broken into, or there is an accidental fire around your home, you risk losing the cash. A bank would certainly have far better security, but you won’t be paying any charges while your money sits with you at home.

Invest your cash – By choosing to invest a portion of your money into something, you’re taking it away from your bank account and into what you think will turn out to be a money maker, rather than a money taker. This doesn’t have to necessarily mean you’ll be setting up your own business, you may instead simply choose to purchase some fin art, or jewellery that you think will grow in value over time, and ultimately make your more money.

Clear some debts – You could use the money you have in a savings account to pay off some debts you still owe. This would be using your savings wisely, as well as relieving the pressure on you in two separate ways. The money will be out of your savings account and therefore void of any charges from banks, as well as your debt being cleared away and no longer in the back of your mind.

Only time will tell

Negative interest rates are something we should all want to avoid, as it isn’t clear how it does anyway any good. Even banks that will be able to start charging customers, they will more than likely only lose their customer base because of actions such as that.

While the economy is undoubtedly struggling due to the terrible factors presented by Covid-19, other solutions will have to be found in the long run, in order to avoid the average customer from going into uproar, due to unfairly sanctioned banking fees on savings accounts and the like.