Should you name and shame late payers? 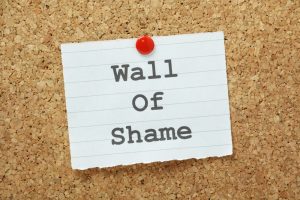 Most of the time, when a business owner tries to tackle late payments problems, they will name and shame the customer in question. We want to investigate whether or not this tactic actually works; is it effective or are there better ways of dealing with late payment problems?

Is naming and shaming enough to stop people from paying late and changing the culture surrounding the dealings of your small business venture? You will want your customers to feel irresponsible if they continue to pay late and force a change upon them.

Naming and shaming is a tactic we’ve seen a great deal of in the business world over the years. Among others, name and shame campaigns have outed organisations paying under the minimum wage, as well as serial tax avoiders.

In these cases, there has been public shock at the named wrongdoers, and they’ve been compelled to put things right. However, with regards to late payment, past name and shame campaigns have seemed to have little effect. The payment reporting regulations presented in 2017 require all large businesses to investigate their payment practices and execution.

Suppliers can then analyse these reports to see the normal time it takes for a bigger company to pay its providers and the extent of payments that it doesn’t make on time. This adequately powers organisations to name and sham themselves should they be poor payers. It was trusted that this would build straightforwardness for providers and urge the most exceedingly bad payers to tidy up their acts.

In any case, it seems these actions have done little to change the manner in which large corporations pay their providers. Of the 1,447 payment reports documented to date this year, 15% (217) uncovered that over half of the business’ invoices were not paid inside agreed terms.

The Prompt Payment Code (PPC) was fortified and presently has the ability to authorise or remove those who’ve joined yet neglect to agree. At the point when a signatory is taken out the Board gives a public assertion and a rundown of eliminated signatories is accessible on the Code’s site, naming and disgracing those with the worst history of payments.

The most recent assertion, dated November 2019, shows 20 organisations were suspended for neglecting to pay suppliers within the agreed timeframe. It likewise uncovered nine companies that were restored for showing consistence.

Even though a few businesses have been restored, showing that the suspension has urged them to further develop their payment execution, it is yet stressing the quantity of organisations that are neglecting to agree to the voluntary code in any case.

Of the 35 signatories suspended in April and July 2019, just 11 have now been re-established.

Additionally, the Forum of Private Business (FPB) has a Hall of Shame where they’ve singled out a portion of the UK’s greatest names for helpless payment practices and deal different organisations the opportunity to report bad business practises.

Why do these companies continue to pay late?

So many businesses out those that pay late, but the problem continues to persist within the UK.

Unmistakably the naming and shaming efforts only target the biggest business ventures in the UK, when late payment is endemic across the UK and a culture that companies huge and little are embracing further.

In any case, are organisations utilising the apparatuses accessible to them to feature clients who pay late before they exchange with them?

For a long time now, organisations have been able to credit check customers and look at clients to check whether they represent a danger to their business. However, many neglect to do as such and put their own venture in danger of late payment and bad debt problems.

What can you do?

Many have asked the government to toughen the consequences for those failing to pay on time. Some others have suggested that the Prompt Payment Code is made mandatory. Though, whilst these would both probably be appreciated, the onus remains on businesses to use the tools available to them to protect themselves.

While ever late payment remains somewhat acceptable, it is vital that all businesses research their customers before agreeing to trade with them. You need to know what you’re getting yourself in for and how to deal with slow paying customers.

Ensure that with every single new client you are performing a credit check and checking online resources, such as their payment reports and the Prompt Payment Code to view their history in this area. If this research reveals a history of poor payment, it’s unlikely that are going to change their ways and start paying on time now.

Will your cash flow stay intact if they do not? If not, you shouldn’t proceed any further with their order. Or, better yet, you could ask for either full or partial payment upfront. On the off chance that you do proceed with the request ensure your agreements are obvious from the start. By setting these toward the beginning of your business relationship you guarantee that the two players are in total agreement and realise what is generally anticipated.

Make certain to likewise remember subtleties of your method for the occasion of late payment. This can incorporate charging interest, re-appropriating the obligation or making a legitimate move.  Frequently this is sufficient to show that you treat late payment in a serious way and urge the client to pay on time no matter what.

What are your views?

How do you feel about naming and shaming late payers? Is it the best way to go, or do you believe there are better options out there? Perhaps businesses need a little more help when it comes to tackling the late payment habits of many customers and clients.

One option is to protect your business with business invoice protection insurance. This type of policy will ensure the invoice gets paid if your customer fails to pay you due to insolvency.